Suns believe they are in position to finally turn the corner 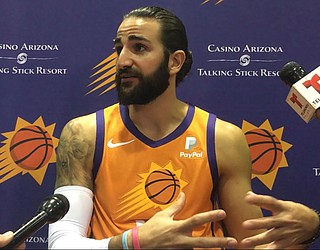 Ricky Rubio will be depended on to help the Suns take strides in the right direction after Phoenix finished with a 19-63 record last season. (Photo by Beau Bearden/Daily Miner)

PHOENIX – Devin Booker is entering his fifth season with the Phoenix Suns, but he has yet to make the playoffs. It is not for a lack of trying though.

The Suns continue to look for a winning formula by combining their young talent with skilled veterans. That is once again the case this season and Booker feels this could be the group to lead Phoenix to the postseason.

“I’m very excited,” Booker said Monday at Suns Media Day. “I think we have a team where even our young guys know the game and are high IQ players. They’re well-coached and ready to work. The additions we made with Ricky (Rubio), Dario (Saric) and Aron Baynes, and re-signing Kelly (Oubre Jr.), I think we have NBA guys who know what they are in this NBA and know what it takes to make it to that next level – and that’s making a playoff push.”

Rubio, Saric and Baynes aren’t the only new faces though. The Suns have a new head coach in Monty Williams and Oubre Jr. knows he brings more than just court knowledge.

But it is also important for a team to have athletes who know what it takes to make the playoffs.

Baynes has been in that position before and the seven-year pro is relishing the opportunity to share his knowledge.

“There are lot of different things that I’ve experienced and I’m just trying to pass some of that onto these guys,” Bayne said. “And trying to help them take those next steps of going in there and competing on a nightly basis.”

Rubio also knows what it takes to play the game and he’ll be depended on to run the point. Booker was in that role most of last season and is glad to have someone take the reins.

“He’s the guy that can put people in the right places at the right time,” Booker said of Rubio. “To have a guy that can take that stress off of me is going to be a big help. At the same time, I’m learning from him. The way he play makes, I want to learn that aspect of his game and the way he thinks the game is two things that I’ve watched in the past. I haven’t watched that closely, but I will now.”

And while it’s too early to tell how this new group meshes on the court, Rubio is aware of the right ingredients to make a successful squad.

“Sometimes it’s not about who has the best players, it’s who has the best team,” he said. “To have that, a team has to have a lot of things together – from chemistry, unselfishness and willing to sacrifice for the team. There’s a lot of factors that are going to make us the team we want to be.”