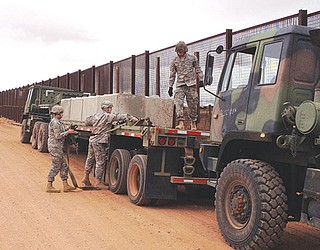 PHOENIX – An unusual string of violence south of Arizona’s border with Mexico has sparked warnings by American authorities and is forcing U.S. citizens who say they won’t stop crossing into Mexico to at least consider how to travel more safely.

Unaccustomed to the kind of violence long seen along some parts of the Texas-Mexico border, those who frequently cross into Mexico from Arizona say they will now think twice about traveling after dark and will confine themselves to busy commercial areas.

“I travel across quite often,” said Ana Borrajo, a chef living in Bisbee, Arizona, who frequents the border communities of Agua Prieta and Naco in Mexico. “I go to the doctor, to the dentist, I go to eat, and I don’t feel threatened.”

But after a recent fatal shootout in Agua Prieta and the ambush killings of three women and six children about an hour’s drive farther south, “I’ll try to go during the day, will try to be more cautious,” Borrajo said.

Terrified residents of Douglas, Arizona, were awakened early Monday by the shootout that erupted between warring drug groups in Agua Prieta. The gunfire was confined to south of the border and reports suggest at least two people were killed.

A similar shootout in June left at least 10 people dead in Agua Prieta and Naco, a 45-minute drive away.

Several hours after the shootout, the women and children – nine members of an extended family with dual U.S.-Mexico citizenship – were killed by cartel gunmen in an isolated area in the mountains between Sonora and Chihuahua states.