No. 21 Arizona rolls over Northern Arizona 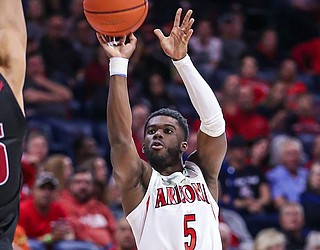 Max Hazzard and the Wildcats opened the 2019 season with a 91-52 rout of Northern Arizona on Wednesday night. (Photo courtesy of Mike Christy/Arizona Athletics)

Zeke Nnaji proved he’s got some game, too.

Touted by Miller as Arizona’s best post player during preseason camp, Nnaji lived up to the billing in his college debut, scoring 20 points to lead the 21st-ranked Wildcats to a 91-52 rout over Northern Arizona on Wednesday night.

“He played tonight like he does all the time,” Miller said. “You see how explosive he is, how strong.”

Arizona used its size to dominate inside, causing the Lumberjacks problems at both ends of the floor in their first game under Shane Burcar.

“Obviously, he’s a freshman, but it doesn’t seem like it when he plays like that,” Gettings said. “I’ve been going at him the past three, four months and if you would have asked me, this would have not been too surprising.”

Cameron Shelton led Northern Arizona with 17 points. The Lumberjacks shot 32% and had 19 turnovers.

An assistant last season, Burcar was elevated to interim coach for the 2019-20 season after Jack Murphy returned to his alma mater to be Miller’s associate head coach.

Murphy left Burcar with plenty of talent on the roster, but the Lumberjacks had a tough matchup trying to slow the long, athletic Wildcats.

“We came down here as an opportunity to try and take on a Pac-12 team,” Burcar said. “I told them to keep their heads up and the message was that we have a bigger picture than tonight’s game.”

Arizona worked the ball inside to Nnaji from the start and NAU had no answer. Overpowering the Lumberjacks inside, the 6-foot-11 freshman had 14 points on 6-of-7 shooting by halftime.

Northern Arizona struggled with Arizona’s size on offense as well, hitting 7 of 27 shots.

Arizona kept turning to Nnaji inside to start the second half and he kept scoring, bulling past the Lumberjacks to score three baskets inside to keep the game out of reach.

“They just have so much size inside,” Burcar said. “It’s going to be tough for anyone to match up with them.”

Arizona opened the season without sophomore Devonaire Doutrive, who was suspended indefinitely for violating team rules.

Doutrive showed flashes last season, but was inconsistent, averaging 3.3 points and 3.0 rebounds while playing 26 of 32 games. He initially planned to transfer from Arizona this summer before opting to return and is expected to play a key role on this year’s team.

Arizona played solid defense most of the night, but particularly on Northern Arizona’s two best shooters.

Bernie Andre, NAU’s leading returning scorer, was held to four points on 1-of-10 shooting. Luke Avdalovic never got untracked, finishing 1 for 3 from the floor for four points. He was fifth nationally in 3-point shooting a year ago, hitting 49.3%.

Northern Arizona never stood much of a chance in one of college basketball’s toughest road venues, but the experience could help when the Big Sky Conference starts.

Arizona was sharp at both ends, playing like it should against a small-conference school.