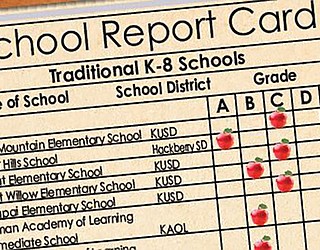 The State Board of Education just released the grades for 2018-2019 and the results are a mixed bag of good and bad news for the community.

Two elementary schools received a grade of “A” – Manzanita Elementary from the Kingman Unified School District and Cedar Hills School from the Hackberry School District. No “A” was admitted to local middle schools.

Kingman Academy of Learning, a charter school, was the only high school that received an “A.” The worst grade, “F,” was given to Kingman Middle School with the KUSD.

“I don’t feel this grade represents our school,” said Kingman Middle School’s Principal, James Jones. “This grade is based on standardized tests, and there’s much more to our school than that.”

It is Jones’ second year as a principal, but it is hardly a first time the school fails in terms of grades.

At the same time, Jones would like to invite parents and the public to come over learn more about what Kingman Middle School has to offer.

“We are working hard to align to the instructions so that we perform better next year,” he assured The Daily Miner.

Susan Chan, Executive Director of Kingman Academy of Learning explained how the grades are calculated.

All children from grades three to eight have so-called “accountability profile.” Thirty percent of the grades comes from tests students take. But there are other factors thanks to which a school can get extra points. That is: students’ growth or improvements done by the students who speak English as a second language.

“There is a rule that we don’t let the students pass from the third to the fourth grade unless they know how to read,” Chan said. “That influences the overall grade, too.”

Kingman Academy is fine with two other grades it received – both the middle school and the intermediate school got a “B.” True, a year ago, both received an “A,” Chan said. KUSD doesn’t know what is to blame, but are working with the data to identify areas for improvement.”

Kingman Academy of Learning Middle School Principal, Tony Victory, is not discouraged with the “B” his school received this year.

“I’m proud of the progress we’ve made and I’m proud of my students’ work,” he said. “We still have the best score among all the middle schools in Mohave County. Academics are important, but they are not everything.”

Kingman Academy of Learning Middle School is a tiny school when compared with Kingman Middle School who received “F” – roughly 1/3 in terms of the body of students.

“That plays a role, too,” Victory admitted. “Because it’s a small school, all the students see their teachers and their principals every day. We keep them accountable.”

Victory is proud of his eight-graders who all passes “Algebra 1” recently.

“We have so many outside-school activities,” he said. “We teach everything, from drama to leadership. We teach them coding and prepare them for the future, not for the jobs that don’t exist.”

Bad grades are said to be blamed also on a recent increase of standards.

“The colleges and businesses say students are not prepared for college,” Chan said. “So the standards are now set a little bit higher. Our students learn to think outside the box.”