With the election a year off, Arizona could become a key player 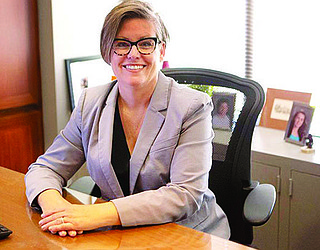 One of the goals for Secretary of State Katie Hobbs is to register more voters and encourage them to become engaged in their elections. (Annika/Cronkite News)

PHOENIX – Tuesday marked 52 weeks until voters will elect a commander-in-chief, all 435 members of Congress and 33 of 100 senators. But for the first time since Bill Clinton won re-election in 1996, pundits aren’t sure whether Arizona will vote red or blue.

Mike Noble, chief of research and managing partner at OH Predictive Insights, said results of the 2016 election point to the state’s uncertain leanings in 2020. Because Donald Trump won Arizona by just 3.5 percentage points, he said, the election will be hard to predict.

“We see the biggest part of where Republicans are hurting right now are among 18- to 34-year-olds,” Noble said. “Hispanics, which is an emerging large demographic here, also suburban voters that we’re seeing. So again, among those moderates, those folks in the middle … they’re just not going the GOP’s way, which they used to go their way.”

And the two major political parties are reacting to that assessment.

Matt Grodsky, a spokesman for the Arizona Democratic Party, gave Cronkite News this statement on the race:

“After a long string of broken promises from Donald Trump and Arizona Republicans, Arizonans are ready to make a change in 2020. We are feeling confident about the year ahead, amidst a strong fundraising year and with an increasingly energized electorate. Over the course of the next year, Democrats will continue to highlight the issues that are most important to Arizonans, making the case that we’re the party that will make Washington and the state Legislature start working for every Arizonan not just the powerful special interests and the wealthy few.”

“Every vote in Arizona needs to be fought for and earned.

No one can take the state for granted, and that’s why we got to work so early in this cycle laying the organizational groundwork to win in 2020. We have had field operatives on the ground throughout the state for months, and President Trump is personally committed to ensuring out volunteers have the resources they need to reach into every corner of the state to contact, persuade, and mobilize voters for victory.” Noble said the state finds itself in a different place in 2020.

“We’re in probably the most unique, or interesting time in Arizona’s history when it comes to Arizona’s implication on the national map,” he said.

Some upcoming deadlines to remember

Months before the Nov. 3 general election, a presidential preference election will be held, but only the Democratic Party will participate, which means only registered Democrats can cast ballots. Arizona Secretary of State Katie Hobbs recommends you do several things before you vote in the March 17 primary.

“Voters need to be aware of the deadlines for registering to participate … especially for the presidential preference election,” Hobbs said.

Registration for the presidential preference election is Feb. 18. Independent voters can change their registrations back after the primary.

Young voters can preregister in Arizona.

“My daughter turns 18 in January,” Hobbs said, “and she’s already registered to vote. And actually, on the way out the door this morning she said, ‘This is the last election I can’t vote in!’”

Working to make it easier to vote

For some Arizona groups, the real battle will come before a single ballot is cast. Arizonans for Fair Elections was launched to make voting easier for disenfranchised groups.

“What we’ve seen at the state Legislature over the last several years is that there’s been a coordinated attempt to stop people from actually having access to the ballot box,” said Rep. Reginald Bolding, D-Phoenix.

“We know here in this state, in this country, fairness to elections has always been at the forefront of democracy.”

Arizonans for Fair Elections contends that many rural Arizonans don’t have access to the internet to register to vote, or transportation to the polls.

“We’re talking about boosting clean elections. … Hopefully ending all the abuses of the lobbying and influence process and making voting easier for all Arizonans,” said Marie Provine, president of the Arizona Advocacy Network, a progressive nonprofit that supports the Fair Elections Act.

You can check your party affiliation and confirm your address ahead of the election by going to the secretary of state’s website.