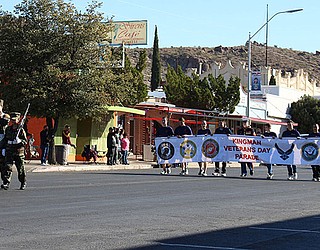 KINGMAN – The brave men and women who serve our country deserve to be honored no matter what, but there is one day that is dedicated solely to them – Veterans Day.

The 17th annual Veterans Day Parade is scheduled for 10 a.m. Saturday, at Fifth Street and proceeding west on Beale Street to First Street.

The theme this year is “Navy,” honoring the United States Navy. The parade plans to honor any local Navy veterans for their service along with many others.

The Young Marines will carry their banner to lead the parade, followed by Cub Scout Pack 66 and the Grand Marshall, who will be 94-year old Navy veteran Robert Puphal. He will be wearing his “Navy whites” for the first time since 1946.

Kingman’s Veterans Day Parade was started 16 years ago by VFW Post 10836 in Butler and marched down Northern Avenue until Dave Stafford moved it downtown where children’s games, music and vendors are set up at Locomotive Park.