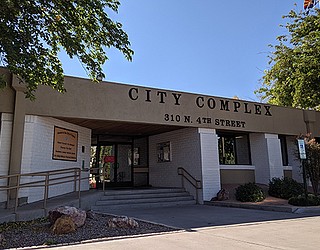 City utility billing and the rest of the City Complex will have longer hours throughout the week, but will be closed Fridays starting Jan. 6. (Daily Miner file photo)

KINGMAN – The City of Kingman will be reaching out to residents via phone and mail throughout the course of the coming weeks for its Citizen Survey and to help determine whether Kingmanites would be receptive to a property tax.

City Manager Ron Foggin explained at City Council’s Tuesday meeting that the City will begin contacting residents next week. The Citizen Survey will be mailed to approximately 1,800 randomly-selected homes within city limits. The City will use the survey to gain a better understanding of how its services, and subsequent customer service and accessibility, are perceived by residents.

“We are encouraging anybody and all that get the survey to take that and send it back in,” Foggin said.

The survey will also be made available to the remainder of residents on the City’s website. However, only the mail-in surveys will be used to compile official results. The City will, Foggin said, look at the online results to see if “there’s a theme that we can catch.”

Residents may also hear from the City of Kingman by phone on an unrelated matter. Foggin told Council that staff hopes to receive responses from around 380 people regarding if they would support a future property tax. Those calls could begin next week.

“Both legitimate, both being sponsored by the City,” Foggin concluded.