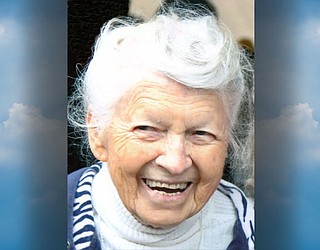 Gene Roush Jerabek, age 101, of Manhattan, Kansas died Oct. 27, 2019, at Homestead Assisted Living in Manhattan. Born Dec. 10, 1917, in Winfield, Pennsylvania, she was the daughter of Samuel Irvin and Pauline May (Benfer) Roush. Gene graduated from high school in 1935 in Mifflinburg, Pennsylvania, and earned her Nursing Certificate at Jefferson Medical College Hospital in Philadelphia, PA.

A World War II veteran, Gene joined the U.S. Army Nurse Corps in September 1941, serving in North Africa and Italy, returning home in September 1945. Gene was awarded battle stars for the Naples-Foggia and Rome-Arno campaigns. During the war she met another lieutenant, George Jerabek. They married June 1, 1944, in Naples, Italy, and as mandated by Army regulations, were accompanied by a driver on their honeymoon.

Following the war, Gene and George moved to Lockport, Illinois, where they raised five children.

After the children were all in school, Gene returned to nursing. Gene and George later retired to Kingman, Arizona, where George died in 1986.

Gene was very devoted to God and her family, enjoyed reading, and prayed diligently. She was a member of the Veterans of Foreign Wars, and a strong supporter of many charitable and Christian causes. She was a dear friend to many, and an active member of Grace Lutheran Church in Kingman until moving closer to her children in 2013.

Gene’s funeral will be Veterans Day, Nov. 11 at 1 p.m. at First Lutheran Church in Manhattan, with Rev. Liz Kocher officiating.

Inurnment will be with her husband in the National Memorial Cemetery of Arizona in Phoenix.

Condolences may be sent to the family c/o David Jerabek, 2827 Illinois Lane, Manhattan, KS, 66502, or online through the funeral home website at www.ymlfuneralhome.com.

Memorial contributions may be made directly to Lutheran Bible Translators, First Lutheran Church in Manhattan, or a charity of your choice, or may be left in care of Yorgensen-Meloan-Londeen Funeral Home, 1616 Poyntz Ave. Manhattan, KS 66502.