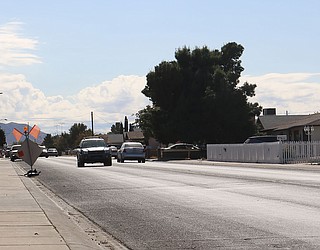 Traffic calming – measures taken to make roadways safer for everyone regardless of their mode of travel – was a topic during Kingman City Council’s Tuesday work session. One location for such measures could be Willow Road. (Photo by Travis Rains/Daily Miner)

KINGMAN – The City of Kingman recognizes that it still needs vehicle traffic to help fuel businesses downtown, however, Council recently received a presentation on European-style “traffic calming,” which aims to make roadways safer for all modes of travel.

He provided a summarizing quote on traffic calming from the nonprofit Project for Public Spaces.

“Founded on the idea that streets should help create and preserve a sense of place; that their purpose is for people to walk, stroll, look, gaze, meet, play, shop and even work alongside cars, but not be dominated by them.”

“We’re trying to achieve an equitable balance between vehicles and other modes, like walking and bicycles,” he said. “Measures should not result in severely restricting traffic ... again, it’s not to get rid of traffic, it’s just to slow them down and provide a safer space.”

Plaunty then spoke to the “three E’s of traffic calming,” the first of which was Engineering. Those are physical and visual changes made to roadway geometry in an effort to influence driver behavior, and can include signage, roadway striping, raised medians, curb extensions, traffic circles and more.

Education is a “big component” Plaunty said. “What we want to do is remind the community of the importance of good driver behavior.”

Enforcement was the third component, and is vital for the program to be successful.

However, Plaunty said there are issues that can arise with traffic calming. One example he provided was for raised medians, which he said are costly and can disgruntle businesses particular about their driveways and being able to attract customers from all directions.

Lane narrowing is already planned for Kingman. The City has received a grant for such work on First Street. Physical changes to the roadway could involve bump-outs or tighter corner radiuses, for example.

But there are concerns with lane narrowing, too, specifically in terms of drainage.

“Kingman is predominantly a surface carry for our stormwater, which presents some problems because when you put a bump-out in it’s kind of a dam when you have a crowned road,” Plaunty said.

Vertical roadway changes most notably include speed bumps, but also include a number of variations. He said that on long, straight roads, speed bumps need to be placed about every 500 feet to be effective.

“And so it takes a lot of speed bumps, not just one, to fix a problem,” he said, also noting that studies have shown that speeds between speed bumps increase as motorists try to make up the time. “Not that they can’t be used. We just want to be really careful where we use them.”

Plaunty said Mohave County uses some traffic-calming measures, but not speed bumps primarily because of the effect they would have on first responders’ response times.

So what would it cost for the City to implement some traffic calming measures? Plaunty explained that a single measure can range from around $2,000 up to hundreds of thousands of dollars.

He said some communities utilize programs where the requesting neighborhood pays for traffic-calming measures. Others limit or restrict the types of traffic calming measures allowed.

“We do need calming measures in Kingman, at several places,” she said, agreeing with Councilwoman Jamie Scott Stehly, who asked that the matter go before Council. She suggested such measures could be placed on Willow Road.