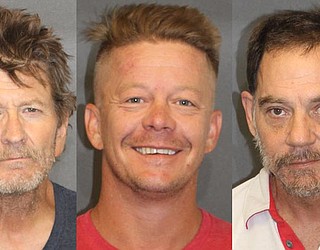 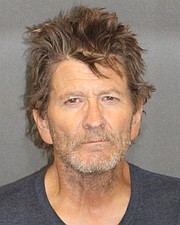 At approximately 11:55 a.m. deputies were on patrol in the area of London Bridge Road and Dover Avenue when they observed a white vehicle fail to make a complete stop at the intersection.

Deputies conducted a traffic stop and made contact with the driver, identified as Coates. A records check revealed Coates to be a registered sex offender who was not in compliance with his reporting requirements.

Coates was detained and a search of the vehicle revealed two marijuana edibles on the backseat floorboard. Coates advised deputies he did not have a medical marijuana card. Bernard Jack Coates was arrested and booked into Mohave County Adult Detention Facility without incident. 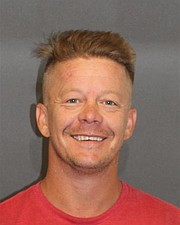 Mohave County Sheriff’s Office deputies arrested Samuel Allen Hardy, 39 of Ivins, Utah, for two felony counts aggravated DUI, and marijuana possession, drug paraphernalia possession, both misdemeanors. At approximately 11:45 p.m. Aug. 10, deputies were on patrol in the area of Interstate 15 milepost 12, when they observed a vehicle in their rear view mirror approaching at a high rate of speed.

The vehicle passed the deputy going approximately 75 mph in a posted 45 mph construction zone. The vehicle continued on to swerve into multiple lanes and almost strike another vehicle.

Deputies initiated a traffic stop and observed an open beer can and a liquor bottle on the center console. Deputies made contact with the driver, identified as Hardy, and could smell the strong odor of intoxicating beverage coming from inside the vehicle.

Deputies observed Hardy’s eyes were red and watery and Hardy was slurring his words during the contact. Field sobriety tests indicated a positive indication of intoxication and a breath test revealed a blood alcohol content of .127%. A search of the vehicle revealed marijuana and a glass pipe. Samuel Allen Hardy was arrested and booked into Mesquite City Jail without incident. 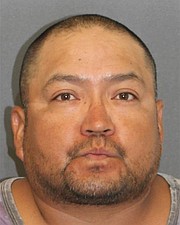 The male driver, later identified as Lewis, was asleep inside the vehicle with the seat reclined, and deputies noticed two open cans of beer on the vehicle’s center console. Deputies woke Lewis and asked for his identification, and a records check revealed a revoked status with a mandatory interlock device to be in the vehicle.

Lewis removed the keys from the ignition and was removed from the vehicle to conduct field sobriety tests. The tests indicated a positive indication of intoxication and a breath test revealed a blood alcohol content of .103%.

Lewis was arrested and transported to Mohave County Adult Detention facility without incident. 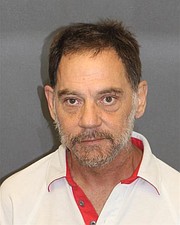 On Aug. 6, deputies responded to a residence in the 2000 block of Butler Avenue in reference to an assault. Deputies arrived on scene and the victim advised that a male subject, known to her as Miller, had attempted to enter her house by force.

The victim had pushed Miller away and told him to leave when Miller allegedly assaulted her by placing her in a choke hold to restrict her breathing. A family member was able to remove Miller from choking the victim and allowed the victim to lock herself inside the residence.

Deputies responded to Miller’s residence, but were unable to make contact. On Aug. 8, deputies received a call that Miller was at the residence and responded. Upon arrival, deputies observed Miller and a female subject sitting on the front porch and advised Miller they needed to speak to him. Miller began yelling at deputies when the female subject opened the gate for them to enter.

Upon entry, the child was located unharmed and removed from the residence. Miller had locked himself inside a bedroom and was given verbal commands to exit the room. Miller refused and deputies kicked the door open, only to find Miller had then locked himself inside the bathroom. The bathroom door was kicked open and Miller began advancing toward deputies. Verbal commands were given to stop and Miller ignored the commands, continuing to advance. Deputies were able to place Miller on the ground, where he proceeded to tuck his hands under his body. A struggle ensued and deputies were eventually able to place Miller in restraints.